Trends in Teen Pregnancy and Childbearing

In 2020, the teen birth rate was 15.4 (births for every 1,000 females ages 15-19), down eight percent from 2019 and down 75 percent from the 1991 peak of 61.8.1 There were 158,043 births to females in this age group, which accounted for less than five percent of all births in 2020. And given the age of these mothers, in 2020 nine in ten (91.7 percent) of these births occurred outside of marriage.1 The teen birth rate has declined to a new low each year since 2009.1 Still, the teen birth rate in the United States remains higher than that in many other developed countries, including Canada and the United Kingdom.2

Not all teen births are first births. In 2020, roughly 15 percent of live births to 15 to 19-year-olds were at least the second child born to the mother.1

Teen birth rates differ substantially by age, race and Hispanic origin, and region of the country. Most adolescents who give birth are 18 or older; in 2020, 76 percent of all teen births occurred to 18 to 19-year-olds.1 As shown in Figure 1, between the 1991 peak and 2020, the overall teen birth rate fell from 61.8 to 15.4 births per 1,000 adolescent females ages 15-19, and it declined across racial and Hispanic origin groups. During the same time period, the teen birth rate fell from 118.2 to 24.4 for Black adolescents, from 104.6 to 23.5 for Hispanic adolescents, and from 43.4 to 10.4 for White adolescents. Birth rates are higher among American Indian/Alaska Native, Native Hawaiian/Other Pacific Islander, Hispanic, and Black adolescents than among teens overall. In 2020, American Indian/Alaska Native adolescent females ages 15-19 had the highest birth rate (25.7 births per 1,000 females ages 15-19), and Native Hawaiian/Other Pacific Islander adolescents had a birth rate of 22.6. Asian adolescents had the lowest rate (2.3).1

Teen birth rates also vary substantially across regions and states. In 2019, the lowest teen birth rates were reported in the northeast, while rates were highest in states across the southern part of the country (see Figure 2). See how your state compares on birth rates, pregnancy rates, sexual activity, and contraceptive use with OPA's national and state adolescent reproductive health fact sheets. 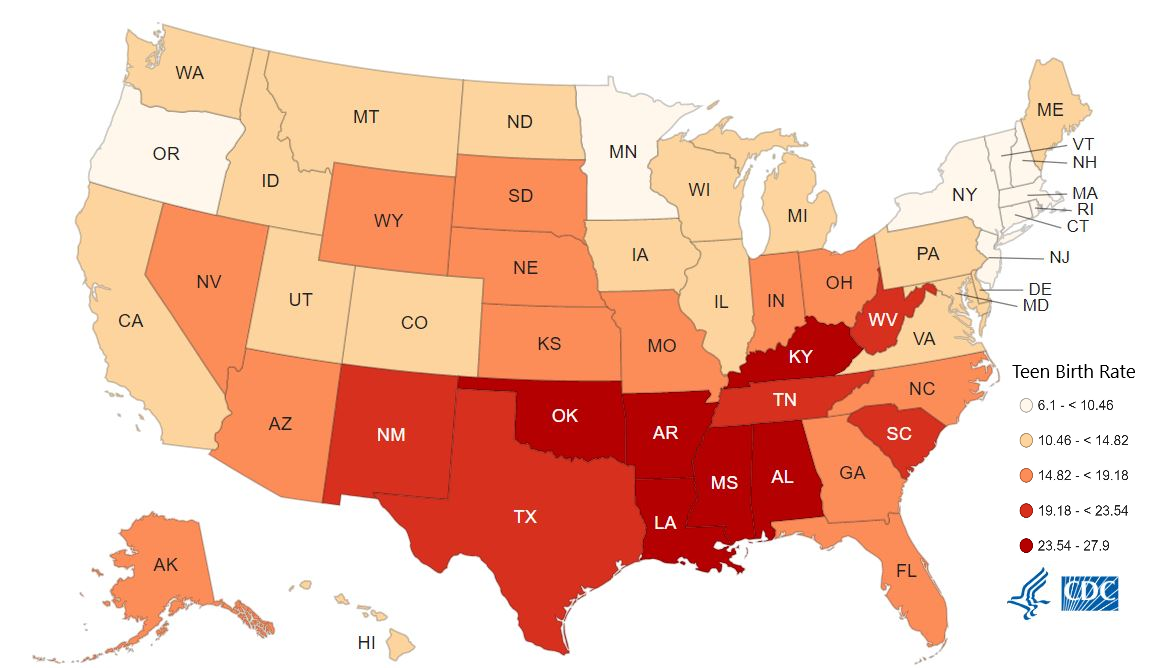 The national teen pregnancy rates for ages 15-17 and 18-19 (the number of pregnancies per 1,000 females in the specified age group) have declined almost continuously for nearly 30 years. The decline has been most striking among teens ages 15-17—by 82 percent, from 74.8 pregnancies per 1,000 females ages 15-17 in 1989 to 13.6 in 2017.3 According to recent research, this decline is due to the combination of delays in sexual intercourse among adolescents and the increased use of effective contraceptives by adolescents.4,5

* Pregnancies are defined as "the sum of births, abortions and fetal losses (i.e., miscarriages, ectopic pregnancies and stillbirths)."7

There are well-documented links between adolescent childbearing and individual, family, and community characteristics. For example, adolescents who feel connected to and do well in school are less likely than are other adolescents to have children. At the family level, youth who feel connected to and supported by their families are less likely to have sex and become pregnant.8 Among females ages 15-24, the probability of having had a birth before age 20 is higher for those whose mothers gave birth as teens and those whose mothers have lower levels of education. In addition, the probability of having a birth before age 20 is lower for those who lived with both biological parents at age 14 compared to those with other living arrangements.9 At the community level, teens who have mentors and have more connection to their communities are less likely to engage in sexual activity, and those who live in communities with higher rates of substance abuse, violence, and hunger are more likely to start having sex early and to have a child.8 The links between teen childbearing and family planning and socioeconomic characteristics, as well as the relatively high rates of adolescent childbearing among Black and Hispanic teens, can be attributed largely to inequities in access to family planning services and information; differences in attitudes about contraception, teen pregnancy, and teen childbearing; and distrust of medical professionals due to experiences with providers and some groups’ history of mistreatment by the medical field.10 Professionals working with youth should be aware of and acknowledge the historical reasons disparities in adolescent reproductive health and childbearing exist in the United States.

3 Maddow-Zimet, I., & Kost K. (2021). Pregnancies, births and abortions in the United States, 1973–2017: National and state trends by age. Guttmacher Institute. https://www.guttmacher.org/sites/default/files/report_downloads/pregnancies-births-abortions-us-1973-2017-appendix-tables.pdf back to top

7 Maddow-Zimet, I., & Kost K. (2021). Pregnancies, births and abortions in the United States, 1973–2017: National and state trends by age—Methodology appendix. Guttmacher Institute. https://www.guttmacher.org/sites/default/files/report_downloads/pregnancies-births-abortions-us-1973-2017-method-appendix.pdf back to top