Understanding the body and the biology of reproduction can inform decisions about preventing pregnancy and deciding whether and when to become pregnant. The next sections describe the basics of puberty, the menstrual cycle, what it means to have fertility awareness and use fertility awareness-based methods (FABM) of family planning, and infertility in women and men.

Puberty is the time in life when a child reaches sexual maturity. This means that the hormone levels in the body—estrogen and progesterone in girls and testosterone in boys—increase and cause physical and emotional changes to occur. Puberty usually happens between ages 8 and 13 for girls and ages 10 and 15 for boys, and the process affects boys and girls differently. When girls reach puberty, they typically start their menstrual cycle.

The menstrual cycle refers to the monthly process that happens in a woman’s body to prepare for a possible pregnancy. It includes the release of an egg from the ovaries (called ovulation), changes in the cervix and thickening of the uterine wall, several hormonal changes, and shedding of the thickened uterine wall through bleeding (called menstruation, also known as a “period” or “menses”). Hormonal fluctuations drive the changes that occur during the menstrual cycle. If pregnancy does not occur, the body sheds the extra lining of the uterus. The blood and tissue leave the uterus through the cervix and exit the body through the vagina. The length of the menstrual cycle is the number of days starting from the first day when bleeding begins until the first day of the next month when bleeding begins again. 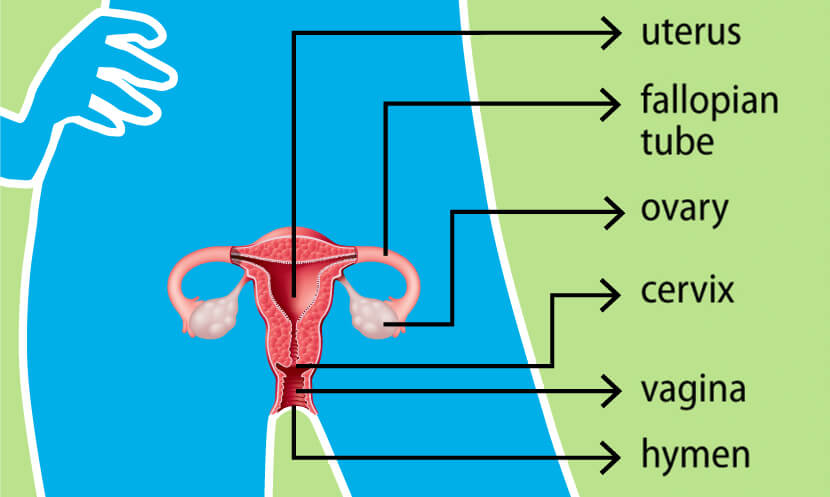 Regular menstrual periods occurring in the years between puberty and menopause are usually a sign that the female body is working normally. Some women experience problems with menstruation, such as irregular or heavy, painful periods; this may be a sign of a health problem. Many women also experience premenstrual syndrome (PMS) symptoms. Women with period problems or PMS should talk to a healthcare provider about ways to treat these issues.

How to Chart Menstrual Cycles

To chart her menstrual cycle, a woman can simply record the day her period starts and when it ends on a paper or electronic calendar. Smartphone and computer applications that chart menstrual cycles are also available. Over time, this tracking will help a woman see what the typical amount of time between periods is, which can help her predict when her next period will start.

Tracking the menstrual cycle can provide useful information for conversations with healthcare providers. For example, a patient may want to discuss the length of her cycle or her experiences with pain or extreme bleeding during her cycle. In addition, tracking the cycle is key to predicting ovulation, which can inform decisions about when to have sex, whether the intent is to avoid pregnancy or become pregnant.

Fertility awareness means being aware of the menstrual cycle and the changes in a woman’s body that happen during this time and understanding when a woman is most likely to get pregnant. Women and couples become more familiar with the signs of ovulation and the pattern of the menstrual cycle to understand how to plan sexual activity to avoid pregnancy or become pregnant.

Fertility awareness-based methods (FABM) involve a woman learning to recognize the signs of her fertile days, which are the days of each month in which she is most likely to become pregnant (conceive). Based on her intentions, she may plan to have unprotected sex during this time in order to conceive, or she may choose to avoid pregnancy by not having sex or by using a barrier birth control method, like condoms, during this time.

There are multiple fertility awareness-based methods that women can use, such as the following:

Infertility is defined as not being able to become pregnant after having regular intercourse (sex) without birth control after one year (or after six months if a woman is 35 or older). Infertility is common. Out of 100 couples in the United States, about 12 to 13 of them have trouble becoming pregnant.

Other less common causes of fertility problems in women can include physical problems with the uterus or uterine fibroids, which are non-cancerous tumors made of fibrous tissue and muscle cells that develop on the walls of the uterus.

There are a few different causes for male infertility. Erectile dysfunction is when a man cannot get or keep an erection (get hard) for sex. Without an erection, it is difficult for a man to release sperm inside the vagina – and, therefore, difficult to get a woman pregnant.

Another problem is varicocele, which is when the veins in a man’s scrotum (sac) can become too large. These big veins heat and cool the testes. When the big veins heat the testes too much, the heat damages the sperm. Sperm damage can cause male infertility.